Shopping Basket
Your Basket is Empty
Quantity:
Subtotal
Taxes
Delivery
Total
There was an error with PayPalClick here to try again

Thank you for your business!You should receive an order confirmation from Paypal shortly.Exit Shopping Basket

A special encounter with history

Some things are just meant to be.

Larry and I arrived in Australia in 1983 and two weeks later I found a wonderful job with a company that no longer exists: Elders IXL.  Elders was a complex organisation, comprising a multitude of companies in a variety of industries which had amalgamated over many years.  One such company was Goldsbrough Mort & Co., a wool broking and auctioneering company founded in 1888, later to be known as Elder Smith Goldsbrough Mort.

In 1981 Elder Smith Goldsbrough Mort & Co Ltd became part of the Elders IXL group of companies, which I had just joined.

In the first few months of my time at Elders, their offices in the old Jam Facrtory in South Yarra underwent a massive renovation to absorb the head offices of all of the recently acquired businesses. Walls were demolished, plush modern spaces created and many records of the old, pre-merger businesses were piled in the corner to be taken to the tip.

Now, I'm from England and have a certain regard for history.  So, hating to see old records destroyed, I 'rescued' a few pieces from the debris, including a leather-bound book of hand-written Goldsbrough Mort minutes dating from 1916 to 1967.

That Minute Book has sat proudly on our book shelves or 34 years, initially in Melbourne, and more recently in Foster.  I suspect that no one other than me has ever looked at it.  Until now.

In July this year guests from Melbourne checked in to Llarrinda Bed & Breakfast for two nights.  The reason they chose to stay with us was not because of our comfortable accommodation, wonderful views and abundant wilflife, but because our name, Llarrinda is so similar to our guest's name, Laurinda.  The first of several coincidences.

They could have chosen to stay in any of our three guest bedrooms, but chose to stay in our 'Panorama Suite'.

Laurinda's husband, Ross, was immediately drawn to a picture on their bedroom wall containing the front and back covers of the June 1906 edition of Goldsorough Mort & Co's 'Australian Pastoralist's Review,' which I had also salvaged from the skip and had framed.   It gave him a shiver, as his grandfather had worked for Goldsbrough Mort and Co for 49 years, and had served as Company Secretary from 1928 to 1945.

Then Ross spotted the leather-bound Minute book and opened it.  And there he saw the hand writing of his grandfather.  It was a goosebump moment for him and for me, when he told me about it the next morning.

Ross told me about his Dad, now well into his 90's, and how much he would love to see that book.  Of course, it was never mine to keep, and I am so very thankful that what would have been destroyed forever has now found its rightful home, with Ross' father - the son of the man who wrote the minutes.

It's a small world out there, and it's very special when one coincidence leads so happily to another.  Enjoy that salvaged treasure, Mr Eddington, and we hope that one day we will to able to welcome you, too, to Llarrinda. 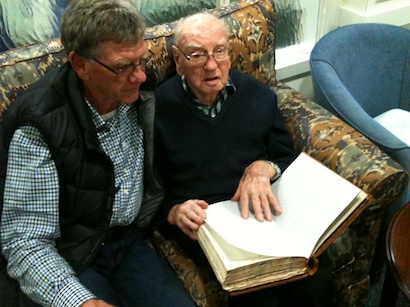 Oops, you forgot something.

The words you entered did not match the given text. Please try again.

Reply jordan shoes
7:46 on 3 July, 2022
I simply wished to say thanks all over again. I am not sure the things I would've implemented without those pointers revealed by you over such concern. Completely was a intimidating scenario in my circumstances, however , noticing the expert technique you treated it took me to leap over happiness. I will be grateful for this advice and as well , wish you are aware of a powerful job your are undertaking training people today thru your website. I know that you've never encountered all of us.
jordan shoes http://www.jordanshoes.us

Reply birkin bag
7:46 on 3 July, 2022
I would like to get across my admiration for your kind-heartedness in support of persons who need assistance with this important idea. Your personal dedication to passing the message all over had been unbelievably interesting and have constantly encouraged those much like me to achieve their desired goals. The important guidelines indicates much to me and further more to my mates. With thanks; from each one of us.
birkin bag http://www.hermesbirkinbags.us.com

Reply westbrook shoes
7:46 on 3 July, 2022
I as well as my friends were found to be checking out the good secrets and techniques found on the website while then I got a terrible suspicion I never thanked the site owner for those techniques. Most of the young men ended up as a consequence warmed to read through all of them and have now absolutely been loving those things. Appreciate your really being very kind and for going for certain tremendous information millions of individuals are really desirous to understand about. Our honest regret for not expressing gratitude to you sooner.
westbrook shoes http://www.russellwestbrookshoes.us

url=https://acyclovir.digital/ says...
where can i buy acyclovir in uk